Showing posts from September, 2010
Show all

Back to the Highlands: Jamie & Claire in Living Color 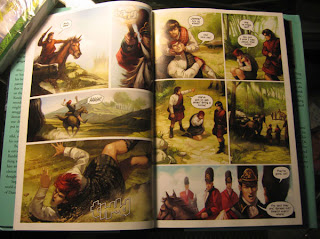 Everyone does it, and no matter what you like to read, I bet you've done it, too. You're reading along, perfectly happy, when suddenly you think to yourself, "Man, if only there were PICTURES in this book!".

That's perfectly understandable when you consider how much visual stimulation we encounter on a daily basis. TV, movies, video games, plus pretty much anything else that can be filmed then streamed to our computers and smart phones with only a few keystrokes, and... you get the picture, right? (Yep, that's a mostly-unintentional tee-hee, there, but it further illustrates the point, if you see what I mean.)
Of course, some things actually are hard to visualize--especially when you only have the written word to go by--and even when an author is adept at describing characters, scenes, etc., there are times when having a few pictures would help.
Occasionally, though, descriptions are so effective that the written word is sufficient. Take, for instance, Diana Ga…
7 comments
Read more

Deep, dark secrets, buried a lifetime ago. Blatant deceptions and little white lies. Intense jealousy and bitter hatred. Paranoia and hysteria, obsessions and compulsions. Crazy, pent-up desire and ecstasy. Loneliness and the depths of despair. The mind is a complex and messed-up place, and author Carolyn Crane makes sure we know it.

Double Cross, the second book in her "Disillusionists Trilogy" (following 2009's Mind Games), runs the gamut of every one of those deliciously-deviant, scary, and trippy emotions and feelings--as well as the resulting actions--in what continues to be an utterly original and entirely entralling spin on the urban fantasy tale.

[Note: If you haven't read Mind Games yet, please read my review of it here, first. Better yet, after reading the review, click the link and get your very own copy of the book. It's good stuff. :)]

Now, to briefly recap where Mind Games left off...
Regular-gal Justine and her other "disillusionist" frie…
3 comments
Read more

After listening--with an enthusiastic (could’ve been glazed) look on my face--to the first (well, probably two-hundred-thirty-ninth) person in my life as he/she proceeded to enlighten (actually, annoy-the-crap-out-of) me about the hilarity (hello--inanity) of the Three Stooges, I made a solemn vow to stop being so politic about the whole subject, and say what I really feel from the get-go in such situations (namely, that you’d have to hogtie me to a chair to get me to watch anything so mind-numbingly irritating). All of which has what to do with anything? Well, a couple of things, actually. First, you’ve been warned about the Stooges and me, okay? And second, I’m trying to illustrate just how subjective humor really is; what one person--or even millions of them--find funny, won’t be the same for everyone. (Really, if you love the Stooges, that’s fine. Just please don’t drag me into it, ‘kay?) What I like best is clever, witty banter, dialogue that preferably comes with a little “bite”; …
Post a Comment
Read more

To what ends will a mother go for her child? Are there lines she cannot, will not cross... or does the mother-child bond trump all? That is one of the primary questions at the very heart of NY Times best-selling author Nancy Taylor Rosenberg's latest legal thriller, My Lost Daughter.

*****
Lily Forrester is definitely one of those "bring home the bacon and fry it up in the pan" kind of women. But, after spending the last twenty-eight years working overtime, trying to make a good life for herself and her daughter--first, climbing up the ladder from prosecutor to superior court judge in the competitive California legal system, and then, trying to keep the family afloat while her alcoholic husband's career  languished--Lily is fully aware that she hasn't exactly been the model mother... and that her daughter, Shana, has always resented her for it.


The rift between them has continued to grow over the years, turning Shana into a spoiled, bitter young woman. So, when Li…
6 comments
Read more

Crime and Magic Under Cover of Midnight

First impressions can be misleading. Take, for instance, author Kelly Gay's series starring Atlanta detective Charlie Madigan. If you only glanced at the covers, you might think the set-up sounded pretty derivative.

I mean seriously, don't many of us have to admit to more than a passing familiarity with all things supernatural (in this case, jinn, ghouls, nymphs, sirens, and even a dragon), and with characters who conduct some sort of witchcraft or produce magical results (witches, mages, various healers, and the like, here)? Haven't we run across more than one of these fate-of-the-world, impending-mega-doom-and-destruction scenarios? Doesn't seeing Atlanta, Georgia function as the backdrop for all of this magic-making and mayhem ring a bell? And, haven't we read umpteen cop "buddy" stories--a great number of which involve a pair of opposite-sex partners (who may or may not have some chemistry together)--and watched them solve crimes and put away bad guys…
Post a Comment
Read more

The Girl Who Led a Revolution

John Lennon might have believed a better future was within reach when he penned "Imagine" nearly forty years ago, but my considerably-more-pessimistic take on humanity causes me to conclude that his vision was little more than a sweet-but-naive pipe dream. (I mean, sure, I enjoyed all the various iterations of "Star Trek"--with the wholesome "Prime Directive" and the "we're-all-equal-pals" federation--as much as the next sci-fi geek did... but it was all those other TV shows and movies set in outerspace--the grungier, nastier ones free of any lyre-playing--that I actually found sort of believable.) So, while Lennon's little wire sunglasses had a rosy cast, my own plastic ones sport a murky, grey-brown tint--and it's through them that I'm picturing a very un-Lennonesque tomorrow... a world full of hungry, desperate people, who never seem to have enough of anything--money, resources, or opportunities--and are concerned only with ba…
3 comments
Read more

Furry Wisdom Gets You Every Time 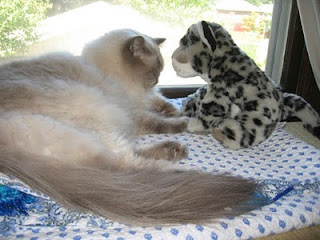 It took me almost one entire week to read a book I should have been able to finish in two days. o_O

You're thinking that it must have been an incredibly awful book, right? Something so bad it was like facing the dentist (armed with that horrid, noisy drill) over and over again, to get me to read it? Well... um, no, not so much. This was actually one of those rare, OMG-this-is-so-amazingly-awesome books.

Huh. Then, I was probably moseying along at what was surely less-than-an-injured-snail's pace in order to savor it, to make it last longer, yes? Erm... yeah, okay, that sounds good. Let's go with that.

(Of course, I was also busy with work and life and... all that other stuff. So there's that, too.)

Anyway, this means I should have a review up in the next day or so (depending, as always, on how quickly I'm able to switch gears, focus, and formulate some sort of remotely-coherent thoughts... Hmm.).

For now, though, here's a pearl of wisdom from my boycat--wisdom …
3 comments
Read more
More posts