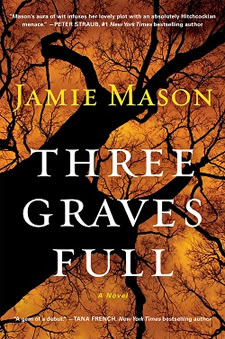 There’s an old saw which holds that nothing in life is certain but death and taxes. (Bit of a Gloomy Gus came up with that one, apparently.) Of course it isn’t any truer than most such sayings; the last time I checked, the sun still rises in the east, mathematical formulas continue to work, and (soon to be relevant here) those little directional compasses--common to hikers’ kits and cars’ rearview mirrors everywhere--reliably keep on pointing due north.
If only our so-called “moral” compasses followed the same rules of behavior, always agreeing on what’s right and wrong, things would be so much simpler, wouldn’t they? But, alas, such isn’t the case; whether due to sheer human perverseness or guided by convenience, the ol’ moral compass shows a penchant for fickleness from one situation to the next... sometimes surprising even us.
Newcomer Jamie Mason exposes the intricacies of our moral compasses in her impressive debut, the psychological thriller Three Graves Full.
~ / ~ / ~ / ~ / ~
…
Post a Comment
Read more
More posts