Look Too Far Into Anything... and You'll Find Something You're Not Supposed to Know 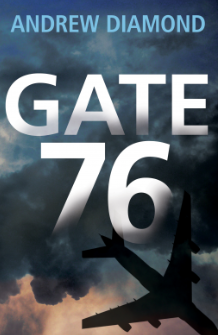 Those chance encounters. Most of the time, they’re mere blips on the radar of our lives… memorable ones, perhaps, but tiny hiccups in otherwise ordinary days, by and large.
Every once in awhile, though… such encounters turn out to be something more, something with the power to snap us fully out of our norm and change us.
Andrew Diamond’s Gate 76 is the story of one such encounter… and all that follows.  ____________________________________
Freddy Ferguson is a good guy. Oh, he may look a little sketchy—a big man with a would-be ordinary-enough face that’s been pummeled a few too many times in the ring to ever rack up adjectives like “good-looking” or “trustworthy”—but it’s the troubled life he’s had which led first to his boxing career, then made him well-suited for his current gig as a private investigator. That already-seen-the-worst-in-people attitude, the instant suspicion, and a sense of hyper-awareness serve him well when observing others. So, whenever he notices something particul…
1 comment
Read more
More posts