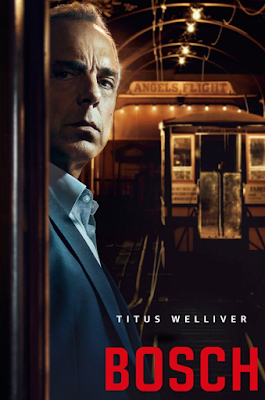 Whenever I’m rehabbing an injury or working on my daily step total, I tend to spend a fair amount of time using cardio equipment. The downside—as anyone who’s ever stepped foot on a treadmill, exercise bike, or elliptical machine will probably agree—is that working out on them can be deadly dull.
My life-hack to curing the monotony? I multi-task, distracting myself from the repetitive boringness by streaming things I want to see.
Coming up over the next few days, then, a little look at some things I streamed (all while on gym equipment!) over the past month… all in their second (or fourth, in one case) seasons.

Bosch
I’ve been a Michael Connelly fan—including his long-running Harry Bosch police detective series (now twenty books in)—forever. So, the Amazon show which he exec-produces—based on those same characters, and simply called, “Bosch”—has been a welcome addition to Connelly’s oeuvre, and the recently-released Season 4 is, for me, the best one, yet.
In the fourth season, the L.A. …
Post a Comment
Read more
More posts