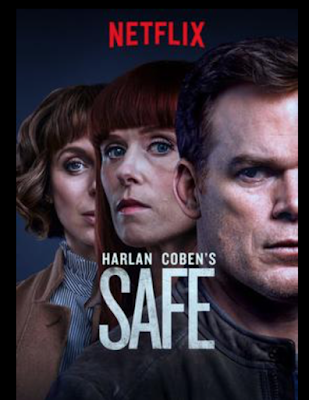 Harlan Coben is one of those authors whose books I’ve been reading for a coon’s age (however long that is), because he consistently delivers deliciously-twisty tales peopled with complex characters.

Recently, he’s also gotten into film productions, so as soon as I saw he had a new TV series out on Netflix—Safe, following 2016’s The Five and 2015’s No Second Chance—it was an easy choice as to what I’d be streaming next.
Short verdict? Wow. (No, really. Wow.)

Yeah, okay, I can do better than that. (And totally spoiler-free, natch.)

Set in a suburban area somewhere in England, Safe mostly takes place within the walls of a gated community. (Picturing beautiful large houses on ample lots, with wide, well-manicured lanes gently wending their way through the well-heeled neighborhood? Cool, then you’re in the right ballpark.)
Dr. Tom Delaney (Michael C. Hall, of “Dexter” and “Six Feet Under” fame) has been trying to make a life for himself and his two teenage daughters following the death of h…
Post a Comment
Read more
More posts