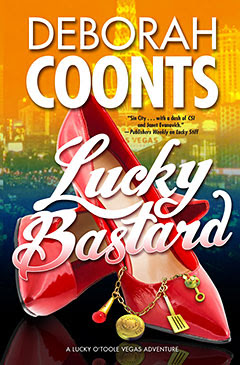 The more things change, the more they stay the same. Sounds like an oxymoron, doesn’t it? Sometimes, though, it makes total sense.
Take, for instance, Las Vegas-native Lucky O’Toole’s equal parts charmed and cursed life. [If you haven’t been a party to her various Sin City exploits yet, then by all means dash on over to my earlier reviews, here, and go from the bottom post up, before reading any further.] Recently promoted to Vice President of Customer Relations--a euphemism for Problem Fixer Extraordinaire, which entails at least as many headaches as it sounds like--at the esteemed Babylon hotel, Lucky still has no “life” to speak of (unless your idea of such means “all work”, in which case she has it in spades). She races around the hotel (often on a pair of highly-unsuitable stiletto heels) putting out fires at all hours of the night and day--placating the occasional less-than-happy guests, unruffling disgruntled employee feathers, and juggling the needs of the various contractors, …
1 comment
Read more
More posts