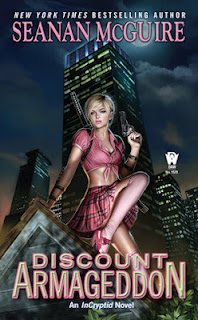 Running around Manhattan in a dingy pair of track shoes is hardly an activity likely to raise many eyebrows. Neither is dashing about clad in designer-heel knockoffs or sporting a skimpy cocktail waitress get-up, for that matter. But, conducting a considerable amount of all that hustling back and forth at sky level, from one rooftop to another, or mucking about in the subterranean levels, below the deepest subway tunnels? That definitely qualifies as unusual. And, doing it loaded down with an assortment of guns, throwing knives, and other concealable weaponry, in pursuit of creatures straight out of “The Night Stalker”? Yeah, that’s just plain odd, even by New York standards. It’s all just another day’s work for intrepid Verity Price, though, in Discount Armageddon, the first book from Seanan McGuire’s brand-new (and delightfully off-kilter) urban fantasy series, known as the “InCryptid Novels”. [Curious about her other works? Check out my reviews, here and here.]
✠    ✠    ✠…
Post a Comment
Read more
More posts