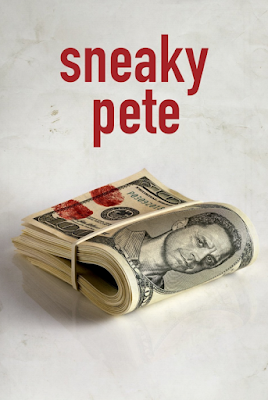 Sneaky Pete Okay, so I lovea good con job. There’s just something about being able to outwit, outmaneuver, and outmatch another person (a group, a company, whatever)—by using your brain, rather than relying on manpower, weaponry, or whatever, that really appeals to me.

But, while there’ve been plenty of good movies about con men (and women, obviously, but no one ever says “con women”)—“The Sting” or “Oceans Eleven” (et al), for instance—televised examples of the genre have been pretty sparse.
With the arrival of “Sneaky Pete” last year—and the follow-up second season, which debuted earlier this spring—that’s all changed, though, because “Pete” is, most assuredly, the real deal.

So, a little background from the first season (non-spoilery, as per my usual, so no worries). A con man (one Marius Josipovic) gets out of prison and, after learning that a lot of really bad dudes from New York are hot on his tail, decides to borrow the identity of his former cellmate (still imprisoned, natch)—a …
Post a Comment
Read more
More posts