Showing posts from February 4, 2013
Show all

Tripping (& Clucking) the Light Fantastic into the Weird 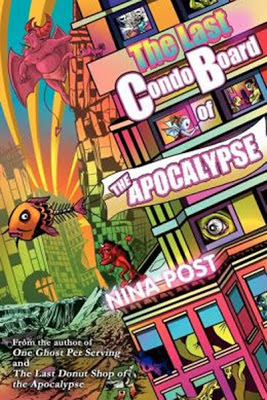 When times are lean, everyone has to make some tough choices. Do you not pay the bills, and let your family go hungry... or do you suck it up and take whatever little jobs you can find to stay afloat? (That’s a no-brainer, right?)
Bounty hunter Kelly Driscoll has been facing the same prospects, now that her work has slowed way down, and the fact that the bounties she tracks down are all escaped monsters--think weird, creepy things you never, ever want to encounter--makes no difference; broke is broke. But, when something that started out seeming like a small job turns into something a whole lot bigger, well... that’s when Kelly has to put her big-girl panties on, in Nina Post‘s whimsically-wild and wacky tale, The Last Condo Board of the Apocalypse.
~ / ~ / ~ / ~ / ~
If nothing else, life is rarely boring in the less-than-melodiously-named Pothole City, where Kelly Driscoll has been eking out a modest living for the past several years. With its mix of old buildin…
2 comments
Read more
More posts