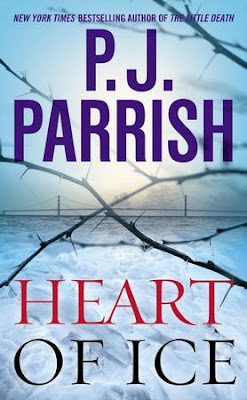 “Growing up” means different things depending on what stage you’re at in life. To kids, it usually symbolizes forbidden fun--namely, whatever it is they’re currently not allowed to do. As an adult, though, it takes on rather an opposite, somewhat-ominous meaning--a mantle of responsibility resting on one’s shoulders, complete with obligations, choices, and repercussions.
A little growth is actually nice to see in a character--be it book, TV, or movie--in the “yeah, this stuff happens to us all” sense; no one goes through life without it changing them, and it’s good to have that reflected in the characters we follow (particularly in an ongoing series).
Yet, for whatever reasons, a lot of times we don’t really see much of it... which is why it really struck me in P.J. Parrish’s latest mystery, Heart of Ice, featuring private eye Louis Kincaid.

Louis is at an interesting place in his life: after a tumultuous childhood spent in the foster care system, he grew up and became a cop... only to …
2 comments
Read more
More posts