The Secrets that Kill (or Make You Want to)... 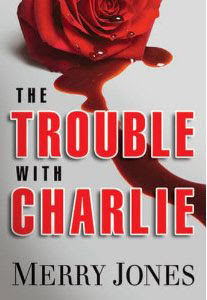 Relationships--much like dairy products and produce--can go bad when you least expect it (and in really unpleasant ways). Unlike the half-empty carton of lumpy milk you lost interest in or the mushy head of lettuce you just plain forgot, though, soured relationships are a whole lot messier to deal with.
There are things almost impossible to forgive, forget, or get past--betrayals, secret lives, abuse, infidelities, criminal acts, major differences about the most fundamental of concepts--any one of which can make the thought of continuing a relationship untenable.
But, when all of those things are present--as they are in Merry Jones’ upcoming thriller, The Trouble with Charlie--well, that’s when things can go from bad to worst in a hurry.
❖  ❖  ❖  ❖  ❖  ❖
After some of the stuff he pulled during the ten years they were together, Elle knows she should be glad to be rid of her almost-ex husband, Charlie. There were the lies (so many lies), the infidelities, and the stealing (like when he hel…
Post a Comment
Read more
More posts