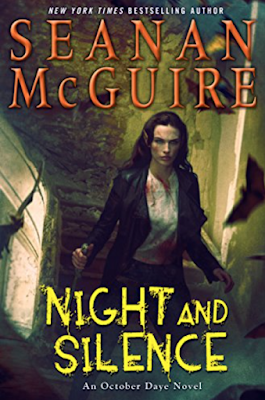 There comes a time when things must end. It’s one of those inescapable truths and, as humans—keenly aware of our own mortality—we get this.
But carbon life forms don’t hold a monopoly on the concept; eventually, everything hits a point of being past its prime.
Most of us hope to reach a place of some decrepitude before it’s time to stop walking this mortal coil. (Being “old” is sorta the goal, for most humans.) Big-ticket items such as computers, phones, and cars are all designed with an expected obsolescence built in (which typically has more to do with corporations making money than with a sudden lack of functionality or usefulness, but I digress…). When it comes to series, though—whether books, movie franchises, or TV shows—the object is definitely to go out on a high note… before whatever-it-is seems tired and long-in-the-tooth.
And that notion is what kept popping into my mind when reading Night and Silence, the latest in Seanan McGuire’s ever-engrossing (and long-running) October D…
2 comments
Read more
More posts