Showing posts from September 4, 2013
Show all

Revolutionaries, Spirits, & Mages... and a Conclusion that's Sort of a Hot Mess 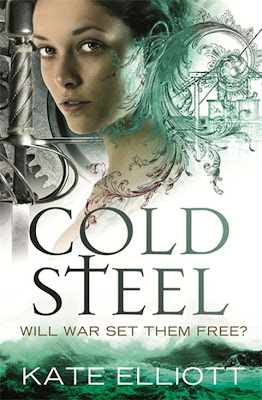 Are heroes formed through years of experience... or is it more likely that they’re simply born to it?
No doubt there’s a heap of anecdotal evidence supporting each side of such a “nurture vs. nature” question, but in her “Spiritwalker” trilogy--an alternate-reality fantasy series set during the Industrial Revolution, featuring two very young women (girls, still, really) who set their minds on changing the world--author Kate Elliott goes the heroism-as-a-birthright route.
The entertaining Cold Magic first introduced us to the cast of characters (notably, feisty Cat Barahal and her irrepressible cousin Bee, along with Cat’s delightful half-brother, the cat/human Rory, and her newly-acquired-though-wholly-unwanted husband, the cold mage Andevai), as well as doing considerable world-building and setting the stage for all of their problems. [You can see my earlier review of it, here, by the way]. Cold Fire [which I somehow never got around to finishing a review for] followed a year later, a…
Post a Comment
Read more
More posts