Destiny Takes Flight on the Wings of a Song: Intrigue in Appalachia 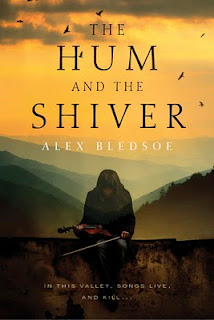 Take some garden-variety youthful rebellion, then throw in a heap of raging hormones and rivalries old and new, and you’ve got the makings for the sort of angst-y drama which plays out everywhere, every single day.
Add a few unearthly mysteries, a wealth of beautiful lyrics and exquisite music, the unmatched splendor of (mostly)-unsullied nature, and a small, enigmatic race of people into the mix, though, and the end result is something quite different... something which can only be found, in fact, in a place like the bucolic Great Smoky Mountains of Eastern Tennessee, in author Alex Bledsoe’s newly-released novel, The Hum and the Shiver.
~ / ~ / ~ / ~ / ~
The tale begins with what appears to be a festive event--a big parade, welcoming the return of still-wounded war hero Private Bronwyn Hyatt to her Cloud County, Tennessee home. In reality, the very last thing the twenty-year-old soldier with the shattered leg wants is fanfare, but--as someone points out to her--a parade isn’t actually for the benefit of the person riding on the float; it’s for everyone in the crowd. So, she dutifully grits her teeth and smiles through the pain, waves to the crowd, and rushes through the mandatory speech, waiting for it all to be over.
A canny observer--say, Don Swayback, the burned-out reporter from the small weekly newspaper one hamlet over, or even new-to-the-area (but observant) preacher, the Reverend Craig Chess--might notice one element curiously missing from the crowd: the distinctive faces of the locals. The reason for that is simple; their celebrations with Bronwyn (the ones glad of her return, anyhow) will take place later, far from the eyes and ears of the horde of media representatives who’ve converged on the tiny mountain town en masse to record the hero's homecoming.
Bronwyn’s “people” aren’t the stereotypical hillbillies that outsiders expect, nor are they quite like anyone else. She is part of the mysterious Tufa, a small group comprised of two clans who--like the Native Americans--were already long-settled in these misty hills when the first Europeans arrived hundreds of years ago. With their characteristic dark hair, perfect white teeth, and similarly-good looks visibly setting them apart from the rest of their Appalachian neighbors, the mystical and poetic Tufa quietly live out their lives, rarely straying from their community... except, that is, for the occasional rebel like Bronwyn Hyatt.
Were it not for her career-ending combat injury, the headstrong Bronwyn would still be off fighting... if only to stay away from everything which first drove her from her mountain home. The matriarchal Tufa have big plans (of the ”taking her rightful place” variety) for the Hyatt family’s only daughter--plans which Bronwyn is in no hurry to fulfill. Nor is she down with the whole idea of being forced to marry another Tufa just to pass along the bloodline--particularly not when that seems to mean being paired off with her abusive ex-boyfriend, the handsome but sadistic Dwayne. Getting away from all the omens, visions, and other portents of tragedy and unhappiness so much a part of Tufa life wasn’t a bad thing in Bronwyn’s mind, either.
Regardless, her return signals that destiny will be resuming its course. Bronwyn spies a new charm hanging on the front porch... the type of magic used to ward off death. She barely makes it through the front door before learning that one of the female elders has already scheduled a meeting, and that a “haint”  has been coming around, waiting to impart who-knows-what alarming news from beyond the grave. Dwayne stops by, renewing his wholly-unwanted attentions. Most unsettling of all, however, is the discovery that she has lost her music; she can no longer play her mandolin nor remember the words to any of their songs... and a Tufa without music coursing steadily through his or her veins might as well be dead.
No matter what Bronwyn might prefer, things are, indeed, coming to a head... and soon. The question is whether or not she can regain the music that is her life’s blood, gather the courage to take her place among her people, and even, perhaps, open herself up to love, in order to meet her destiny.
~ / ~ / ~ / ~ / ~
Big props go to author Bledsoe, because The Hum and the Shiver is that rare beast--a work that actually feels fresh and original, instead of being simply another well-executed copy of something popular.
Why, exactly, is it so special? There’s hardly a dearth of strong, young female voices out there in the crowded field of fantasy fiction. Still, Bronwyn manages to earn her place among the better ones as a complex, multi-dimensional character--one far from perfect, but eminently-relatable, likable, and funny, in all her imperfection.
The mystery of the Tufa and their way of life is key as well, of course. (No, I’m not even going to hint at what that’s all about; let’s just say that the journey taken to get to that answer is at least as important as the answer itself.) The author paints a fascinating picture of these remote people, then adds shade and depth by exploring their treatment of one another and outsiders’ attitudes toward them... while still leaving plenty of things we don’t understand to future books.
Above all, though, it is the uniqueness of the setting which really makes this story come alive. Sure, we have scads of urban fantasies set in metropolitan areas (hence “urban”) to choose from, but there aren’t many genuinely rural ones--and certainly very few in the Appalachians. It is a backdrop painted not only with broad brushstrokes of vibrant color, as seen in the extraordinary people and their intensely-moving music, but also tinted with the delicate wash of muted pastels, in the weatherworn hills as old as time itself.
The Hum and the Shiver is a thoroughly-satisfying read... leaving me eagerly awaiting a return visit to see what happens next.