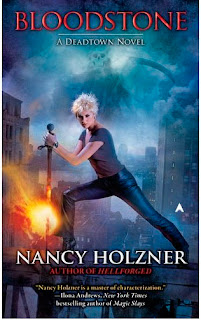 It is often said that there is no rest for the wicked, and--regardless of whether you interpret it (as I do) to mean that evil never sleeps (but is always lying in wait, ready to attack)... or you prefer the biblically-derived (with oodles of hellfire-and-damnation implicit) interpretation which posits that evildoers will eventually find themselves forever in torment--it’s a saying which has the ring of a truism.
The equally-important corollary, of course, is that the good guys--namely, the police, watchdogs (be they canine or human), and other assorted heroes and super-heroes--manage to get precious little rest, either, since they must needs be ever-vigilant against the sundry forces of all that lurking evil.
Imagine, then, always having to straddle a line between the two sides... being viewed by certain segments as a savior, while others pegged you as a monster. That’s the uncomfortable (not to mention exhausting) position which Victory “Vicky” Vaughn finds herself in once again, as she tackles both prejudice and the baddest of ancient baddies in Nancy Holzner’s third “Deadtown” tale, Bloodstone...
~ / ~ / ~ / ~ / ~
Fresh off saving the residents of Boston--both the “norms” and the “PAs” (short for Paranormal Americans, a designation which includes werewolves, vampires, and zombies)--from the united forces of the evil Morfran (sort of like the granddaddy of all demons) and her own (possibly)-very-distant-cousin Pryce, just one short month earlier, Vicky has barely found time to work on getting her own life back to normal.
Her vampire roommate, Juliet, is still missing (in addition to being wanted by the law), which--given the political and social climate in most of Beantown--is cause for considerable concern. Relations with her older sister, Gwen, are still strained, to say the least. Other areas of her life are faring better, though. Vicky’s hunky werewolf boyfriend, the successful paranormal-lawyer Kane, has healed nicely from his wounds, and their relationship is on an upswing. Things are likewise going well with her job, serving as Boston’s only professional demon-slayer-for-hire.
Naturally, the fact that anything is going well means it’s about time for some new evil to hit town, destroying the fragile sense of calm and normality (or at least, as normal as things can be, ever since the bizarre plague that turned two thousand Bostonians into zombies overnight a few years earlier). This time round, evil rears its ugly head in the form of a brutal killer known as the South End Reaper.
Despite the lack of any evidence whatsoever linking the mutilations and deaths of three humans from Boston’s south side to members of the paranormal population, it is nonetheless the city’s “monsters” who are bearing the brunt of this latest escalation of fear and rampant hate. Radical groups are calling for removal of all the PAs, and the mayor has ordered the police to take drastic measures, putting Deadtown’s residents under lockdown and enacting a strict curfew within the zone. (The reaction in Deadtown, unsurprisingly, is less than ecstatic.)
With tensions growing--and additional murders by the Reaper a gruesome certainty--the whole city seems poised for a meltdown. And, when the long-lost Juliet suddenly reappears--horribly weakened (possibly even dying?), yet somehow, caught up in the middle of everything--Vicky knows that she can’t just sit by and watch things get progressively worse.
Enlisting the aid of her stalwart little group of go-to friends and family--Kane; her indomitable Aunt Mab; the diligent detective (and briefly, potential love interest) Daniel; and the hulking, monosyllabic, and mysterious bar-owner, Axel--as well as looking to some unexpected sources--her teenaged zombie ex-intern, Tina, and Tina’s goth friends; her still-more-estranged-than-not sister, Gwen; and even her own young niece, Gwen’s daughter Maria--Vicky can only hope that she'll be able to scrape together enough mental, physical, and emotional firepower to get to the bottom of the murders, save Juliet (if possible), and bring the ancient evil out into the light of day in order to eradicate it (simultaneously vindicating Deadtown's hapless denizens).
No sweat, right? Well, not exactly, because if she doesn’t succeed? Not only will there no longer be a Deadtown... but there won’t be a Boston left to speak of, either.
~ / ~ / ~ / ~ / ~
Bloodstone is another highly-satisfying tale in what has proven to be a compelling and intelligent series, and it may be my favorite “Deadtown” story yet, actually. Holzner continues to build on her small but strong cast of main characters, providing each of them a little more depth with every book, as well as offering up some tantalizing new characters in minor roles (characters that could easily be featured more prominently, because they’re so interesting). By turns funny, sarcastic, anxious, angry, sad, and even, occasionally, a bit wistful, Vicky and company are well worth spending quality time with, always.
Speaking of interesting, there’s a lot of cool mythology in Bloodstone--English as well as Welsh, this time. The new historical elements the author introduces mesh nicely with what we already knew from the previous books, and help set up future actions (it seems inevitable that there will be an ultimate showdown at some point); by the conclusion of this book, I think I’ve worked out who will be involved.
If you’re a fan of urban fantasies but haven’t yet tried the “Deadtown” series, now is a great time to take the plunge.