Murder in the Mountains... a Snow-Covered Mystery 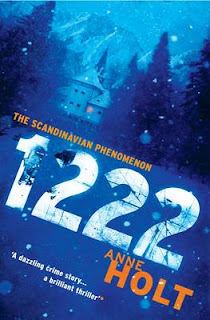 In the dead of winter, Norway is a land of ice and snow. It has never been more so though, than during what is proving to be the worst blizzard in several decades--a complete and utter whiteout, the likes of which not even the old-timers can recall.

Hardly the ideal conditions for traveling by rail through the high mountain peaks, of course, but for the passengers of train 601, en route from Oslo to Bergen, such is their nerve-wracking--if temporary--predicament... until everything goes topsy-turvy, and train 601 jumps the icy tracks and smashes into a snowy embankment, stranding all aboard in a tiny, remote town situated 1,222 meters above sea level, while the biting winds and blinding snows rage all around.
Miraculously, it appears that everyone (aside from the train’s unfortunate driver) sustained only minor injuries, and all two-hundred-sixty-nine passengers are transported from the wrecked cars to the town’s one hotel, an historic mountain lodge fortuitously located nearby.

Typically, surviving an accident of this nature and finding suitable shelter would be the worst of the ordeal; after that, it would just be a matter of waiting for the blizzard to subside so that alternate transportation arrangements might be made. Fate has other plans in mind for the passengers of 601, though; when morning breaks, they make an unpleasant discovery... the body of one of their fellow passengers. Murdered.
More death awaits and, as the body count rises within the claustrophobic confines of this small, snowed-in hotel, it falls to one extremely-reluctant woman to catch a killer... lest she end up numbered among the dead, herself, in Norwegian author Anne Holt’s latest (and literal, hehe) chiller, 1222.
✻  ✻  ✻  ✻  ✻  ✻  ✻  ✻  ✻  ✻
Although 1222 has a sizable cast, the backbone of the story is definitely Hanne Wilhelmsen, a middle-aged, retired police inspector now wheelchair-bound, paralyzed from the waist down after being shot in the line of duty. (Note that I didn’t refer to her as the “heart and soul” of the story; Hanne is a fascinating character, but warm and cuddly, or pitiable, or even particularly likable, she is not. She has always been brusque, standoffish, and ill-tempered, apparently, and the constant physical pain she now endures has only exaggerated those qualities.) The very last thing Hanne wants to do is conduct any sort of investigation (into the murder of a clergyman, no less!), but once word gets out that she’s a retired inspector, it becomes clear that’s just what she’ll be doing.
Alternately helping and hindering her along the way are a motley assortment of characters. The hotel manager is an attractive young woman who shows surprising leadership qualities as she (mostly) succeeds in getting a couple hundred confused and unintended “guests” to go where they need to be and more or less behave themselves. Out of the many doctors who were on the train, one in particular is interested in helping Hanne--an indefatigable and somewhat-irascible fellow who also happens to be a dwarf. Then there’s the local chap, a lawyer who heard the crash and rushed out to aid in the rescue efforts, but found the weather too formidable to return to his home afterward, and is now stuck in the hotel with everyone else. Finally, there’s a scroungy young teenage boy in whom Hanne has taken a professional interest--clearly a runaway, untrusting of adults, but also obviously smart and capable--who is co-opted into helping her.
The makeup of the other passengers is no less curious, with an exceptionally-high preponderance of both doctors and clergy (each group having been headed to Bergen for large conferences), and relatively few people not tied in some way to either group. And then, there are the mysterious passengers (or cargo) on the last car on the train... a car with armed security guards, whose contents (human or otherwise) no one else on the train has seen, either before or after the accident. (Rumors, of course, abound on the nature of the last car... but rumors are not answers.) All anyone knows for sure is that the top floor of the hotel was sealed off before the rest of the train’s passengers arrived... and the last car was emptied before anyone else was rescued.
When a second and then a third body are found over the next couple of days--as the hotel is completely snowed under, with no one able to enter or exit whatsoever, and all outside communications are likewise down--mass fear, paranoia, and even outright revolt threaten the fragile co-existence of everyone (still alive) in the hotel. If Hanne can’t force herself to do what needs to be done with regards to ferreting out the killer, there’s no telling how much higher that body count will go before the once-in-a-century blizzard finally wears itself out.
✻  ✻  ✻  ✻  ✻  ✻  ✻  ✻  ✻  ✻
I love winter, in all of its bitter cold, blindingly-white snow, and early dark glory, so it should come as little surprise that stories set in the frigid months--especially those in which the weather is truly key to the action--have always been among my favorites. There’s just something about such cruel starkness mixed with such incredible beauty that I find utterly compelling. Happily, 1222 delivers in a big way.
This is more than just a thoroughly-engrossing atmospheric tale, though; 1222 is also a really well-done mystery/psychological thriller, with a little twist on the classic locked-room mystery (a la Agatha Christie, et al) plus a neat spin on the going-stir-crazy-in-a-hotel theme (think Stephen King’s The Shining). To top it all off, we even get a protagonist who actually feels original, and an admirably-interesting cast of secondary characters, to boot.
Unputdownable from beginning to end, 1222 is definitely a must-read for thriller fans.