The Proud, the Prejudiced... and the Murderous? 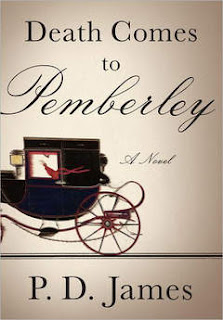 It is, I’d wager, the rare person who hasn’t read an awesome story, only to turn the final page, realize there’s nothing more, and wail, “But... what happens next?!?”
Leading the pack in the insatiable wishing-for-something-“more” department is Jane Austen’s Pride and Prejudice. That delightful classic alone has spawned countless prequels, sequels, and “inspired-by” tales, ranging from prim-&-proper continuations of the same story lines, to mysteries putting Elizabeth Darcy’s keen mind (and fine eyes, no doubt) to the test, to bawdy bedroom romps and zombie battles--the likes of which must’ve surely made Miss Austen do several spins in her grave.
The resulting works, as one would imagine, vary wildly in their successfulness; not every idea translates well (the zombies--much as I enjoy reading about their insatiable brain-munching and the thought of such a quirky mashup--got old very quickly), while others sort of ooze inappropriateness (graphically-smexy scenes featuring heaving Bennet parts and pulsating Darcy pieces have a rather high ick-factor for me).
When an undeniable master of her craft--in this case, the highly-acclaimed British mystery writer P.D. James--decides to take on Austen, though, that’s the sort of thing to make me sit up and take notice. A closer look at her spin on the genre, then, with Death Comes to Pemberley...
James picks up the tale in 1803, six years after the Darcys and Bingleys said their joint “I do’s”. Since then, Elizabeth has settled nicely into her role as mistress of the posh Pemberley mansion (with very few, cough--Lady Catherine De Bourgh and Mr. Collins--detractors), and she and Darcy are the doting parents of two small boys. The Bingleys, meanwhile, have an estate located at not-too great a distance--as well as three young children of their own--which adds immeasurably to the happiness of both couples.
Things are presently a bit hectic, as final preparations are underway for the yearly, not-to-be-missed shindig at Pemberley, Lady Anne’s Ball. The swanky soiree, held in honor of Darcy’s late mother, will be a nice break from all the anxieties over thoughts of more war.
Not quite everyone known to the Darcys is invited, however. Since that fateful day more than six years ago when Darcy simultaneously bailed out/forced the cad Wickham to make an honest woman out of Elizabeth’s hopelessly-flighty younger sister Lydia, the two couples have maintained a mutual policy of no contact.
Ah, but things have a way of changing. On the dark-and-stormy eve of the big ball, a coach suddenly barrels up the mansion’s driveway with an hysterical Lydia on board... claiming, as she throws herself out of the carriage in a flurry of sodden flounces and salty tears, that Wickham and his friend have just been murdered, somewhere on the grounds of Pemberley.

Darcy and erstwhile family friend Colonel Fitzwilliam spring into action, mounting a
search in the woods... whereupon they stumble across the body of one very dead Captain Denny, in the arms of a bloodied and drunken Wickham, loudly wailing that he has just killed his only friend.
The festivities, naturally, are kaput, as anyone who might know something, have seen something, or been party to something must be questioned... from the staff at the nearby hotel (from whence the ill-fated trio obtained the coach in which Lydia planned to crash the ball, and where Wickham imbibed mass quantities of alcohol), to Colonel Fitzwilliam (out on a lengthy--and curiously-timed--walk in the storm), to Wickham (who--once sobered up enough the following day--insists that Denny must have run into a startled poacher or other scoundrel before Wickham caught up with him).
Darcy may have managed to pull some strings (especially those on his purse) in the past for the ne’er-do-well thorn in his side, Wickham... but no amount of money or favors will help now. Guilty or innocent... only the lawyers, the judge, and a jury of his peers are left to decide Wickham’s fate--not to mention, the reputation and happiness of the Bennet and Darcy families--this time.
There’s a lot that’s all sorts of wonderful about Death Comes to Pemberley. First, of course, is the quality of the writing; P.D. James is no slouch, and her words manage a poetic sort of ease while maintaining the proper tone. The story is a fabulous homage to Austen; James not only highlights all the salient details of the assorted relationships and events from P&P, but she goes on to embroider and expand upon them with descriptions and characterizations of which Miss Austen surely would’ve approved--even, in a couple of places (and much to my delight!) bringing in characters from other Austen works for brief appearances. This is the way to treat fans to a little of the “what happens next” we’ve always craved!
The mystery--which is quite a good one, by the way--remains true to everything we know of the characters and their histories. Elizabeth doesn’t suddenly fancy herself a detective or anything convenient like that; instead, the mystery plays out as another troublesome event in her life to be gotten through. There are some really well-crafted courtroom scenes, too, and it was fun contrasting them in my mind with similar scenes from modern mysteries and legal thrillers.
My only quibble (which, admittedly, is rather a strange one, coming from really-enjoys-the-dark-and-gloomy me) is that there’s a bit of a pall overhanging Pemberley for most of the book. That isn’t to say the humor so treasured in P&P is absent here, though--quite the contrary; several passages had me grinning, and a few made me laugh outright. Still, the overall tone definitely seems a trifle grim. (Granted, there isn’t any dancing here--what with the ball being pre-empted by that pesky murder--nor any picnics, visits to the seaside, or rampant flirting, so perhaps a bit less effervescence is to be expected.)
If you’ve never “gotten” the allure of Jane Austen and her brilliant P&P, this one isn’t going to change your mind. But, if you’ve always harbored the hope that someone would finally do justice to Austen’s vision, pick up Death Comes to Pemberley pronto.