Wedding Day Blues: The Case of the Down Under Runner 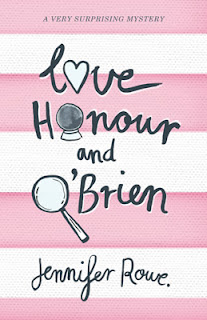 Of all the things that could go wrong on your wedding day, being jilted would have to rank right up at the top of the list as the worst.
Learning that you'd been dumped via a Post-it note stuck to the fridge would certainly add a whole new level of awful, though... and finding out your formerly-significant other had also just absconded with your life savings? Well, that would pretty much be the icing on top of your suddenly-useless wedding cake.
Putting your broken heart and humiliated pride aside for the moment, though, the real issue would be, what would you do next?
Aussie author Jennifer Rowe blithely offers up one possible scenario in the clever and cheeky new caper, Love, Honour, and O'Brien.
Holly Love had always considered herself a happily-ordinary sort of girl, with average looks, respectable intelligence, and a certain degree of competence in most things. No, she wasn't likely to win any beauty pageants, earn big money appearing on a TV quiz show, or find herself ensconced in a cushy office with a large staff at her beck and call, but she had friends and family who appreciated her and a steady job handling the invoices for a busy Melbourne office supplies company, which in turn allowed her to rent a little place of her own.
In her eyes, though, the biggest measure of her success was actually her fiancé--hunky, successful, self-made businessman, Andrew McNish. The fact that he knew she was the one for him after only a couple short months together made it that much sweeter... until, that is, the whole wedding day fiasco, complete with vanished bridegroom, Post-it note apology, and emptied-out joint bank account.
When Holly factors in her sudden loss-of-domicile (because of course she'd let her apartment go, since moving in with her new husband was imminent) and loss-of-wages (since of course she'd given notice at her job, as the newlyweds would soon be living and working together in a whole new town), the prospects for her immediate future add up to a very grim picture, indeed.
Deducing that feeling sorry for herself won't go far in putting a roof over her head or food in her belly, she decides to try to get some answers, instead. First stop, a pay phone, where a directory search points her to a slew of private investigators, each promising results and assuring confidentiality.
Holly's chosen-at-random p.i.--one Mick O'Brien--is as scruffy and shady as they come, but his world-weary air and seen-it-all eyes convince her that if anyone can track down her wayward, scallywag-of-an-ex-fiancé, he is the man to do it.
There’s just one small problem. When she goes to his office a couple days later to see if he’s had any luck, she finds a hungry parrot, some junk.. and one now-very-much-dead private eye.
Things being what they are--Holly, with nowhere to stay (aside from her ancient Honda, which is less-than-homey) and literally no money (having hired the detective with the last of her cash), and some of O'Brien's eccentric neighbors (an elderly dominatrix and a kooky psychic), persuading her to stay on at his place overnight (well, honestly, it was just easier to let them think she worked for him than to admit hiring him to find her sleazy ex)--she soon finds herself in the strange position of considering filling O'Brien's shoes... taking over not only his office space/living quarters, but also taking on his job.
And yes, the fact that the first of O'Brien's clients whose calls she fields is a woman, demanding a progress report on her case... a case which involves finding the handsome, charming, long-lost brother she had just recently found, but who was now suddenly missing (along with some of her family heirlooms and money)... well, it's only natural that Holly would find herself sort of sucked in to the whole bizarre idea.
When her amateur investigating lands her in the middle of one huge mess of certifiable craziness, though--and when scary men with guns start chasing and threatening her--she starts to rethink this whole finding-Andrew-at-any-costs-and-masquerading-as-a-private-eye idea. Of course, by then, she's in way too deep...
Love, Honour, and O'Brien is one of the most-delightfully droll books I've read in a long time; it had me chuckling from beginning to end. Holly is a great "everygirl" sort of heroine--plucky and determined to make the best of things, even if that means taking over a dive apartment in the middle of nowhere (a hamlet in Australia's remote-but-scenic Blue Mountains, actually) and accidentally finding herself running the anything-but-lucrative business (for which she has no training or special aptitude) of its deceased owner.
Full of loopy characters--from the aforementioned hokey (but accurate) psychic, the white-haired provider of sexual services, and the know-it-all parrot, to an Elvis impersonator (who drives a hearse), a velour-track-suited health care worker, a mousey little exterminator (with a voluptuous--and possibly-cheating--wife), and a somewhat-inept gang of mobsters--and scene after scene of hilarity and mayhem, Love, Honour, and O’Brien is a fast-paced, frothy treat... and I’m eagerly looking forward to seeing what the talented and inventive Ms. Rowe serves up next.