The Pet Psychic, the Persian Pussycat, & the Pistol 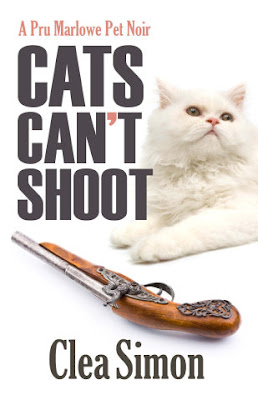 Although I’ve always been an animal lover, my heart (surprise, surprise) belongs to cats. That does not, it should be noted, make me a “crazy cat lady” (perceived sanity and gender nothwithstanding). My house isn’t overflowing with feline tchotchkes, nor does my wardrobe contain even one t-shirt covered with kitties frolicking in a field of daisies. (Stray cat fur wafting about is a whole 'nother matter, but we won't go into that.)


So, when yet another feline-centric mystery landed on my desk, I eyeballed it warily. Would it be that rare beast, a genuinely-good book that happened to feature cats... or would it be just another tired schmaltz fest? (I swear, if one more mystery is solved by an adorable cat who walks over and puts his paw on the exact place in a conveniently-unburied letter to name the killer, I’m gonna lob that book at the nearest wall.) (Unless it’s on my Kindle, in which case I shall resort to mentally lobbing it.) Been there, done that.

Hesitations aside, though, the description for Clea Simon’s Cats Can’t Shoot (which is actually the second in a series, following on the heels of Dogs Don’t Lie) sounded intriguing, so I decided to give it a whirl (with my own furry boycat by my side).
~ / ~ / ~
Pru Marlowe didn’t grow up intending to be an animal behaviorist--and she certainly didn’t expect to find herself scraping for work, doing as much dog-walking and poop-scooping as calling on her therapeutic skills, back in the small town she’d gleefully fled years earlier--but such are the surprises life has a way of doling out.
When she receives a frantic phone call from the police--telling her there’s been a cat shooting(?!?)--she’s a little unclear what role she’s to play at the scene. (A behaviorist specializes in observing animals, then determining their emotional and intellectual needs... something which seems impossible in this case.)  Nonetheless, she races to the mansion where the shooting took place, outraged and ready to lay into the perpetrator of such a heinous crime. What she finds, however, is a dead man, slumped over his desk, and nothing more.
Perplexed, she waits for an explanation, but when it comes, is even more confused.  The cat is quite alive and reasonably well (albeit traumatized, hissing and mreowling from her current hiding spot in the back of the bookcase); she isn’t the victim in question... it seems that she’s the killer.
It sounds too preposterous for words. How could a Persian kitty--this exquisite, pampered pussycat--kill a grown man? Moreover, how could she possibly work her floofy white paw around the trigger of a gun--a dueling pistol, no less--and fire it?
Unbelievably, the police insist that Fluffy (yes, “Fluffy”, pfft) is guilty of the crime, and must be quarantined at the local shelter until she can be studied and, erm, questioned. (At least Pru finally knows where she figures into the picture.)
The next day, when Pru attempts to work with Fluffy, she becomes even more convinced that something hinky is afoot... and is a lot more likely to involve two feet rather than four furry ones. But then, Pru isn’t just your standard animal behaviorist (although she’s very careful to let everyone think that’s all she is). A couple years earlier, Pru discovered she’d been blessed (cursed?) with a newfound talent--leaving her able not only to ascertain what her animal clients were feeling, but to actually hear their thoughts... and to mentally communicate back-and-forth with them. (Unfortunately, this ability isn’t restricted to her clients; she’s also privy to the thoughts of all the birds, squirrels, and bunnies out there--of every animal within her immediate vicinity. That's a lot of noise.)
Curiously, Fluffy seems to be blocking Pru’s efforts at communication... on purpose. What is it, Pru can only wonder, that Fluffy is trying to hide? Does it have something to do with the dead man’s wealthy widow, a nasty piece of work who makes no secret of her intense dislike for the feline? Perhaps it concerns the couple’s Girl Friday, a young woman who may have been involved on a more-intimate level with the dead man--and is now begging to be given custody of the precocious Persian. Maybe the family lawyer, who shares a fondness for old weapons (and had a hand in Fluffy’s adoption), has an idea.
When one of her ex-boyfriends--a former NYC policeman now turned private security something-or-other--shows up out of the blue, asking strange questions (and with a mob boss in tow), Pru knows for sure that something is very wrong. And, when the shelter doctor gives her a deadly ultimatum--either Pru successfully re-socializes Fluffy so she can be put up for re-adoption, or (gulp) Fluffy will be euthanized--she knows it’s up to her, the only one putting the cat’s welfare first, to solve the mystery, clear Fluffy’s name, and save her from certain death.
~ / ~ / ~
The mere thought of being able to converse with my beloved furbaby, as Pru does in Cats Can’t Shoot, is fantastic. (Like most pet parents, I probably have a decent handle on what he’s thinking most of the time, but to know for sure, and be able to hold actual conversations? Whoa.) It’s such a compelling idea, and author Simon handles it in a believable (and very funny) way, always allowing each of the animals that Pru interacts with to maintain his or her own natural mannerisms. (The Bichon Frise, for instance, is a feisty little fellow with plenty of attitude, far more interested in chasing down smells than in letting Pru pick his brain. The Siamese, whose human mommy is sweet but oblivious, is a royal princess, and thrives on being acknowledged as such.) These scenes are absolutely delightful, coming across very naturally rather than feeling contrived.
Pru’s relationship with her longtime roommate, Wallis the tabby, is also fabulously well-drawn. Neither is the demonstrative, touchy-feely sort; they’re prickly, independent mirrors of each other, and Wallis sarcastically offers up tidbits of wisdom in much the way she might bestow the gift of a decapitated mouse head to Pru. (Anyone who’s had a standoffish pet will identify with their relationship.)
But what about the mystery, you ask? It’s a surprisingly good one, with plenty of little twists and turns to keep you guessing until the end, and the resolution (especially the aftermath) delivers a nifty little kick.
Cats Can’t Shoot is a thoroughly-enjoyable read... thought-provoking, interesting, and funny, with a whole lot of heart. I loved it. :)

[Note: Don’t think you “must love cats” to read and appreciate this book; if you’re more of a “dog person”, that’s perfectly fine, since Cats Can’t Shoot features dogs as much as cats. This one’s for animal lovers, pure and simple--all those people willing to open their hearts and homes, and to share them with furry bundles of awesomeness.]