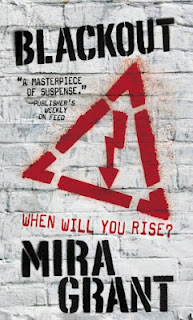 While (not-so-valiantly) battling through one of those especially-nasty, lingering cold-and-flu thingies a few months ago, I thought--not for the first time--how awesome life would be if only someone were to finally come up with an effective cure for the accursed ailment... not another useless “remedy”, but something that would either stop the stupid virus in its tracks or plain render us immune.
And then I remembered the zombies... and promptly squashed my little daydream dead. (Hiking up my big-girl panties and toughing it out suddenly gained a whole lot of appeal, even if it meant "sleeping" upright on the sofa for three weeks straight.)
If you’re saying, “Wait... what?”, right now, hie yourself on over to these two reviews before reading any further:  here and here. Otherwise, it’s time for the thrilling conclusion to acclaimed sci-fi author Mira Grant’s zombie-riffic “Newsflesh” trilogy, Blackout.
☠ ~ ☠ ~ ☠ ~ ☠
When last we left the core group of “After the End Times” bloggers, they were on the run once again... this time, not only from scary, flesh-munching zombies (gulp!), but from a majorly pissed-off CDC, as well. (Breaking into a secure, highly-classified government facility--in the midst of the ongoing zombie outbreak--then causing all sorts of mayhem once inside, tends to make the government less than pleased with you. Eh, go figure.)
What choice do the intrepid bloggers have, though? They’ve already lost so many--from co-founder Georgia Mason, to fellow staffers Dave and Buffy--and so much--forced to vacate their headquarters after it was blown up, then having to go on the run, leaving any family any friends behind--and have been betrayed so many times, that going to whatever lengths necessary to find and report the truth isn’t "optional"... it’s basically a moral imperative.
But, oh, the changes that have taken place. No longer is this the same tight team that gleefully goes out on field work (read, zombie-hunting) or posts catchy, tell-all exposés. Georgia’s adopted brother Shaun--left without the anchor his sister had always provided him--is still riding the crazy train, spending more and more time talking to his dead sister’s memory (yep, not only does he see and hear her, but holds conversations aloud with her, as well), so Becks has taken over leadership from Shaun of the “Irwin” (poke-it-with-big-sticks-while-filming-and-try-not-to-get-eaten) branch. Maggie Garcia (of the richer-than-Croesus, Big Pharma family) is still in charge of the “Fictionals” branch in the wake of Buffy’s demise, and Mahir Gouda made the long trip over from London to take the reins of the “Newsies” after losing Georgia.
Being in hiding and on the run, though, is putting a big-time crimp in their style; most of their blog posts (which we, once again, are privy to throughout the book) remain “unpublished”. From uncovering the most-massive conspiracy ever, to outsmarting crazy-mad scientists bent on doing who-knows-what, to making furtive trips all over the U.S. while trying to stay a half-step ahead of everyone who wants to shut them up for good, to evading hungry zombies at every turn (whew!), Shaun and company are in for the trip of their lives... and will have one helluva story to tell, if they can somehow live long enough to tell it.
☠ ~ ☠ ~ ☠ ~ ☠
I actually finished Blackout more than a week ago, and have been mulling it over ever since, trying to figure out what to say about it. (Always a little bit tricky when there are things you don’t want to/shouldn’t know for sure until it’s time for you to know them, as in this case.)
First, I’ve thoroughly enjoyed this series, and Blackout, to me, feels more or less like the ending it should have, so that’s good. The conspiracy--once the many layers have been peeled away--is at least as scary as the zombies are, which is also to the good. (It doesn’t take a news junkie to imagine that big government conspiracies are not only possible, but even probable, which lends this tale a chillingly-believable cautionary vibe.) And, of course, we still have (a lot of) the same characters, all of whom are well-drawn and interesting (if not always entirely likable); that’s another big plus.
Unfortunately, though, I also had a couple of problems with this book. First, I think Blackout suffers from a little bloat (which isn’t something I’ve ever thought about either Mira Grant or her alter-ego, Seanan McGuire). In particular, there was just too much time spent on Shaun’s “craziness”; I know he's obsessed with Georgia’s memory and misses her (yada, yada), but I really could’ve done with a lot less of his annoying self-indulgence. (Yes, Shaun, you see and talk to dead people. Well, make that one dead person. Got it. Now, for the love of human-brain-craving zombie bears, move on, or at least shut up.)
My other problem is, well, something I can’t get into here... simply because it pertains to one of the major “surprises”. (In truth, it wasn’t actually much of a shock, but more of an “OMG, I hope it doesn’t turn out to be that... well, shoot, it did” kind of things.) Suffice it to say, you’ll know it when you get there... and you can form your own opinions (as you would anyway, right?). Let’s just leave it that this... revelation... was something of a disappointment, for me.
Still, as stated earlier, I definitely enjoyed this series--including Blackout. As a reader, it was a LOT of fun to go along for the ride... because what a ride it was. :)