After Jack: Murder & Mayhem at The Met 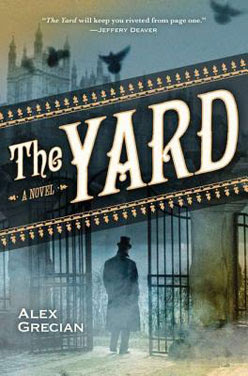 A year has come and gone since the infamous butcher who terrorized all of London last committed any of his atrocities against the city’s prostitute community--then simply vanished--but the effects of Jack the Ripper’s murderous spree can still be felt.

Daily life has resumed, with the masses still struggling to eke out their meager existences in the squalid, teeming metropolis, while the more-privileged attempt to shield themselves from such ugliness, but the prevalent attitude among all of London’s residents toward the police force remains, to put it mildly, less than favorable. Five women murdered and horribly mutilated... and the murderer still on the loose? Such gross incompetence!

No one feels that failure more keenly than do the dozen members of the Metropolitan Police’s recently-formed Murder Squad--the undermanned, overworked (and underpaid) group of men tasked with solving not only the Ripper murders but every other murder in and around London, as well. That frustration--combined with the depressing realization that they’ll never be caught up on all the work (not in a city with yearly murders or other suspicious deaths numbering in the tens of thousands)--has left morale at an all-time low around Scotland Yard headquarters.

It is precisely this downbeat atmosphere--one of disdain on the side of the residents and discouragement on the side of the detectives--into which the latest series of murders intrudes... only this time, it isn’t the more-easily-overlooked, poorest class being targeted; the police, themselves, are the victims of this new round of murders-most-foul, in Alex Grecian’s richly-atmospheric tale, The Yard.

When Murder Squad-newbie Walter Day arrives at the scene of what promises to be a sensational case--the discovery of a body, chopped into smaller pieces then stuffed into a large steamer trunk and left at the train station--he has no idea how sensational it will prove to be. The unfortunate chap to have met such a gruesome end isn’t just anyone; shockingly, it’s one of their own--a Murder Squad detective, Inspector Little. And, no one is more surprised than Walter, himself, when he’s assigned the lead in the investigation.

The other remaining members of the squad range from mildly-surprised to downright-outraged at this decision; how could the commissioner put this young lad, new to London, who had never even met their deceased co-worker, in charge of something so important?

Luckily for Walter, there are a few allies to be had. Besides the commissioner, one of the other detectives on the Murder Squad--Inspector Pringle--seems to have faith in him, as does an earnest young constable, Hammersmith. The most invaluable source of aid, however, comes from an unexpected (considering the era) source: the morgue.

Dr. Bernard Kingsley had thought himself perfectly content with his teaching job at the university... until a chance visit to the deplorable, filthy hovel rather grandly calling itself the “city morgue” opened his eyes to a greater need--and to his true calling: seeing to the questions surrounding London’s dead, as only someone with actual knowledge of the human body could do (instead of the man straight from the workhouse and his mentally-challenged brother, as was the case on Kingsley’s arrival). The doctor immediately petitioned to open his own facility, and thus became the city’s first forensic pathologist.

Although Walter brings an impartial perspective to the case, and young Constable Hammersmith has a keen mind and good instincts--and both men possess the sort of single-minded focus which ensures no stone will go unturned--the problem is there’s not much to go on, leaving the squad stumped. Nor do Dr. Kingsley’s findings lead them to any real answers; it seems that scissors were used to repeatedly stab the victim, and sturdy thread to sew the eyes and mouth shut. Stray hairs found on the clothing suggest the presence of an animal at some point (although such could also have come from the lining of the trunk). Hardly helpful clues, in a city of millions.

The investigation is basically stalled, with the general consensus that it was a one-off committed by someone harboring a serious grudge against Inspector Little... until, that is, a second body is found, chopped up and stowed in a steamer trunk... and it’s another policeman.

A compelling--if highly-controversial--bit of evidence comes from Dr. Kingsley, who claims to have found identical markings on objects on or around each body... visible patterns made by the killer’s own fingertips which, according to Kingsley, are unique to that individual. This cutting-edge study--looked upon with varying degrees of interest, curiosity, and derision by the men of The Yard--could never be used in court, of course... but could well lead them to the brutal killer.

Now, if only they can figure out who he is, and find him before their number has dwindled any further...

The Yard, for me, is that rare beast--a perfect book. From the opening scene, which introduces most of the main players and sets a chilling tone, I was seriously hooked. There’s something eerily compelling--even all these years later-- about the mystery surrounding Jack the Ripper, but other books, TV shows, and movies have dealt with that many times over. The Yard offers a different spin; it looks at what (at least, fictionally) happens next.

What makes it so compulsively readable, besides the fresh take on an old story? Fabulous attention to period detail (seamlessly mixing historical facts in with the storytelling), with rich descriptions that evoke another time and place (and not a particularly pretty, clean, or romantic one, at that; this is a dirty, smoggy, mean London). Characters that come alive on the page, and feel true to their era (without coming across as either fusty, ridiculous caricatures--although there are some delightfully-eccentric characters here--or as modern-day men and women who just talk a little funny). Some interesting settings--places we don’t often get to visit in period books--that allow for surprisingly-cool action sequences. And, an overriding sense of doom, brought about by the grim realization that Jack wasn’t just a shocking anomaly, a lone perpetrator of unspeakable horrors... but that another madman, targeting a different group of people, is on a rampage... and that still others must surely be out there as well, biding their time.

Alex Grecian hits it out of the ballpark with The Yard, one of the best series’ debuts I’ve come across in ages. Whether you fall more on the murder-mystery side, the historical-fiction side, or the thriller side, this one is, without a doubt, a can’t-miss read.