Foibles & Bits of Foolery: A Yank Takes on Merry Old England... and Learns to Fit In 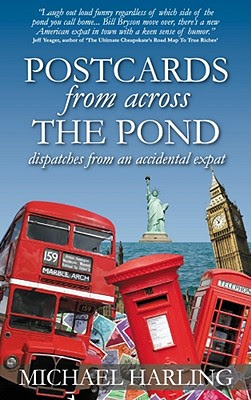 Like a lot of people, I enjoy travel. Not so much the getting-there part, mind you (which, in my experience, involves enduring either too much mind- and posterior-numbing time on an uncomfortable car seat while watching a whole lot of nothing pass by, or a killer-migraine-inducing flight during which I’m forced to toy with the question of what good the seat-cushion flotation device would really do me, were we to unexpectedly make a hard landing in Farmer Johnson’s wheat field--or for that matter, even in a semi-handy body of water, seeing as how I can’t swim), but the being-there part--provided there’s plenty to see, do, and experience--is pretty swell.

Actually finding the time and opportunity to do much traveling has always been a challenge, though, what with trying to juggle work and other responsibilities. (And perversely, all the interconnectedness we have at our disposal today only makes matters worse, not better; it’s impossible to truly “get away from it all” when anyone can--and most assuredly will--reach you at any ol’ inconvenient time.)

It’s not much of a stretch, then, to say that a considerable amount of travel is done vicariously. We read books set elsewhere, avidly soaking up the author’s descriptions of exotic (or at least different) places; we watch movies showing far-off locales with wide-eyed wonder. (Okay, perhaps you don’t, but I do.)

One thing I don’t regularly do much of, though, is read travel books. Sure, if I’m planning that rare trip to wherever, I’ll scour the bookstore for all the helpful guides and insiders’ tomes of tips I can get my hands on, but as a general rule, they’re never my standard reading fare. (Maybe because such books would serve as more of a downer than means of enlightenment, if travel were indeed not imminent...)

Nonetheless, after spying Michael Harling’s Postcards from across the Pond, there was no way it wasn’t going straight into my shopping basket. Such an irresistible premise: an American expat (who moves for love rather than for some dodgy financial finagling or quasi-political reason) finds himself uprooted and replanted on the other side of “The Pond”, to a place that--despite a so-called common language--quite often seems to be like a whole ‘nother world.

Happily, it delivers. Written in a breezy, “postcard”-style (although none of the pieces could, technically, come even close to fitting on a postcard in the most cramped of handwriting), Harling’s essays-in-miniature describe in no small detail the various quirks, oddities, and other interesting bits and bobs he’s encountered whilst going about his daily life since undertaking his own personal sea change several years ago.

What makes the assortment of ramblings in Postcards from across The Pond so refreshing is Harling’s own good-naturedness. Even when regaling us with something that must have been monumentally frustrating at the time (for instance, coping with a bus system that frequently--and without any warning or explanation whatsoever--neglects to show up at its designated spots to pick up the expectant passengers, who, in turn, might wait hours for naught), he manages to find considerable humor in the situation... and often at his own expense (why he’s so befuddled with the system, while the rest of the country just goes about with business as usual).

More than serving as an amusing travelogue, highlighting all the memorable (and not-so) places he’s been, Postcards from across The Pond  is, at heart, a fish-out-of-water tale. Equal fun is made of customs, attitudes, and habits on both sides of the Atlantic (but never in a mean-spirited or petty way) from someone who’s experienced both; Harling simply recounts what he sees and observes the differences (often, to great comedic effect). From holidays and customs (Easter? not remotely the same thing in England as it is in the States) to the scale of things (the minuteness of English cars, household appliances, and stores, compared to the mega-size everything he grew up with) to being surrounded by the ubiquitous British passion for football (which is known as soccer only to the Americans), he covers the stuff you’ve probably always wondered about--but didn’t necessarily realize you did--than the info commonly provided in all those guidebooks.

Full of laugh-out-loud funny bits, wistful asides, and charming observations, Postcards from across The Pond is a thoroughly-delightful read, offering something for (nearly)everyone... not just the hardcore Anglophiles or those of us merely longing to set foot on English soil someday. (At least now I'll know what to expect--or not--from the bus system. Also, to say, "Sorry..." rather than "Excuse me..." when someone's in my way. I'm still not trying blood pudding or haggis, though.)