Life and Death Behind the Robe 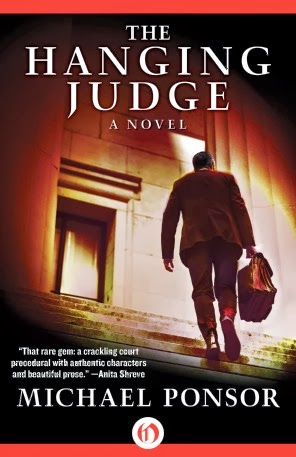 I’ll never be a trial lawyer, yet have a fair idea of what they go through (no doubt seeing as it’s well-trod ground in countless books, shows, and movies). I haven’t had jury duty, but have no trouble putting myself in a jurist’s shoes. And, although I’ve never been (nor ever will be, knock on wood) the defendant in a court case, it’s easy enough to imagine how awfully fraught that situation must be.

Being the judge, though--the mysterious, all-powerful figure who sports those flowing robes and rules like royalty in his/her courtroom--well, picturing just what that’s like is another matter. Until now, that is. Enter newcomer Michael Ponsor into the fray of legal thrillers with his stellar debut, The Hanging Judge.

It’s just another ordinary morning in an urban neighborhood in Holyoke, Massachusetts... until, that is, a drive-by shooting leaves a drug dealer and an innocent bystander--a nurse on her way to put in a shift at the lower-income clinic she volunteered at--dead, on opposite sides of the street.

An off-duty officer gives chase, eventually apprehending the driver--an underage kid; the shooter had already bailed out somewhere else. After some questioning down at the station, though, the kid gives up the shooter: a fellow gang member (and ex-con) who goes by the street name “Moon” Hudson.

A warrant is issued for his arrest, and Moon is taken into custody in his own home early the next morning, in front of his wife and howling baby daughter. To his apparent surprise--and his wife’s obvious shock--a stash of drugs is also found, in the basement. Things don’t look good for Mr. Hudson.

Things look far worse, however, once the case gets political. The powers-that-be (including an influential relative of the slain nurse) are calling for heads to (more-or-less-literally) roll--Moon’s sizable melon, to be precise--but there’s just one small catch: Massachusetts doesn’t have the death penalty. So, the US attorney does some finagling, and the case is taken out of the state’s hands and placed squarely into the realm of the federal court (which does allow for penalties with the most final of punishments).

Judge David Norcross--with only two years on the bench under his judicial belt--is the one “lucky” enough to catch the case... along with all the public outcry and political urging to see the guilty party get the needle. Unfortunately, Judge Norcross is sort of conflicted on the whole idea of the death sentence, and none too happy at the pressure being applied from all sides.

Of course, the outcome of any case is dependent upon a great many people... such as the chain-smoking, seen-it-all defense attorney with decades of experience (who actually sort of believes in his client’s innocence); the elegant, driven, female prosecutor (under enormous pressure to get a guilty verdict); the prosecution’s witnesses (from the sweating, beat-up cop who was first on the scene, to the shifty kid who acted as driver, to a storeowner who saw the shooter run by his establishment); the victim’s family (the nurse’s husband and three sons, each feeling sadness, anger, and/or bitterness over the crime); the defendant’s wife (who claims her husband was home at the time of the shooting); and the defendant, himself (sitting at the defense table, trying to marshal his emotions and expressions into something not-so-guilty-looking).

Interspersed throughout the story are a series of interesting little asides, which depict a murder trial in colonial Massachusetts (and allow the reader see how far our legal system has come, in the interim). This side story--which also ties in with the author’s own tale--is a fascinating bit of history, and a nifty little bonus.

With twists and turns galore--including a budding romance, assorted threats, missing persons, and so much more--it’s a bumpy, exhilarating ride to the final verdict.
~ / ~ / ~ / ~ / ~

It’s been a long time since I read a really good legal thriller--heck, even a not-so-great one, for that matter--something which dawned on me only a few short pages into The Hanging Judge. (But don’t worry; this one falls squarely under the “really, really good” column.) Better yet, it’s not just a compelling story with interesting characters and a fresh point of view--experiencing everything through the eyes of the judge, from his courtroom to his chambers to his home and personal life--but is a fully-fleshed-out tale, with due attention paid to all the characters, so that each feels like a real person (with believable emotions and motivations).

As it happens, there’s an excellent reason (aside from sheer talent) why The Hanging Judge feels so true-to-life: author Ponsor is, himself, a former trial attorney and magistrate judge, and has been serving as a US district judge for more than a decade. (Fortunately for us, he also happens to be a very clever man with a wonderful feeling for timing, a great sense of humor, and an easy and elegant mastery of words.)

In short, The Hanging Judge is a page-turner I don’t think you’ll want to miss.