Nothing Short of a Firing Line Could Make Me Finish This One... (UF Book REVIEW)

March 27, 2020
The world has done a completely-insane, spin-and-180-twist move on its axis during the first three months of 2020 due to the global coronavirus pandemic, leaving the vast majority of us feeling some combination of nervous/anxious/uncertain about… well, basically EVERYthing.

Thank goodness for books, right? (I mean, as long as you’re not reading about deadly contagions, plagues, or biological warfare, which… yeah, no.)

Long before (we’re talking WEEKS) things got really bad here in the U.S., though, I’d started a book—an Urban Fantasy tale by an author I’d never read—which sounded like a mindless, light diversion from all of the usual, non-scary-deadly-virus stuff that currently has me on edge.

So, why haven’t I finished the book? What’s to blame—the awful COVID19 crisis? A rash of debilitating migraines? No, actually the disappointing issue is that the book in question—R.J. Blain’s Playing with Fire—is just so mind-numbingly awful that weeks later, I STILL can’t force myself to finish it. 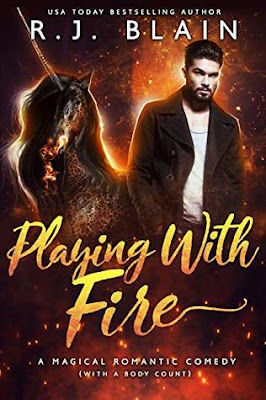 Billed as “a magical romantic comedy” (see, sounds like a delightful little romp already, right??), PwF deals with a human barista who moonlights as a cleaner—but rather than houses or office buildings, Bailey’s “cleaning” gigs involve handling dangerous magical substances, such as gorgon bile or pure pixie dust (things which would either be deadly or painfully toxic to the other 99.9-percent of humans). Sarcastic and long-suffering (in ways that only those who’ve ever worked in any sort of service jobs dealing with masses of Joe and Jane Q. Public will EVER fully understand) Bailey has the earmarks of a cool, spunky heroine.

So far so good… and, once we’re introduced to the local police chief, Samuel Quinn (aka Obvious Hunky Hero Guy), a beyond-handsome, charming foil for the prickly Bailey, things look even more promising.

When Quinn enlists the barista’s aid—pitting the pair against each other (a solid formula for friction, if ever there was one), and showcasing Bailey’s ability to let verbal zingers fly—you’d think that things would take off, and they do… for a very brief time. After that, though, things unfortunately spiral downward very, very quickly.

What happens, you ask? In a word, repetition. (OMFG, soooooooo much repetition..!!!1!) Bailey has something like three trains of thought; how much she hates Quinn, how ridiculously-hot she finds him, and, eventually, how much she wants to have sex with him.

But, THAT doesn’t sound so bad, you’re probably thinking (knowing that I said from the get-go that this is was a light, fluffy, “romantic comedy”). And, if Blain had actually built more story into… well, the story, I’d agree. She doesn’t, however; her writing style consists of maybe three ways to have her characters (mainly Bailey, since that’s the POV we experience the story from) think and say things. Let me stress this point again (because to NOT really hammer it home would be doing potential readers of this book a disservice); the entire first three-fourths of the book—which is where I finally gave up in defeat, remember!—is a reiteration, over and over and over again, of Bailey having the Exact. Same. Thoughts.

It never goes deeper. Bailey has no profound utterances, no epiphanies, whatsoever. (There’s some sex—nothing especially scintillating or memorable, one way or the other.) And the humor—such as it was, early on—wears insanely thin, once you’ve read the same line a dozen times.

The writing is so puerile, in fact, that it feels like you’re reading the diary of a 13-year-old girl. (Which, if it were about a 13-year-old girl—minus the sex in that case, obviously—would make it all a little more palatable.)

Oh, and the tropes… surprise, surprise, they’re here, too. Average-looking, mouthy, take-no-guff, kickass heroine? Check. Adonis-worthy heroine, with eyes only for her? Check. One or the other one of them being a virgin (in their later 20’s, no less)? Yup, that, too.

Final take: If, after all this, you’re still saying, “Oh, I dunno; Playing with Fire sounds kinda fun,” then by all means, give it a whirl. Just, you know, don’t say I didn’t warn you first…