Be Careful What You Wish For... (You Are Not Alone thriller REVIEW)

May 18, 2020
For a lot of us—in this case, female, adult singletons who’ve moved to some place from somewhere else—daily life isn’t only about the usual challenges of work (or looking for work), feeding ourselves, doing laundry, paying bills, working out, and trying to fit some kind of fun in somehow, but it’s also a matter of… trying to survive. And often, feeling entirely alone in that very singular pursuit. 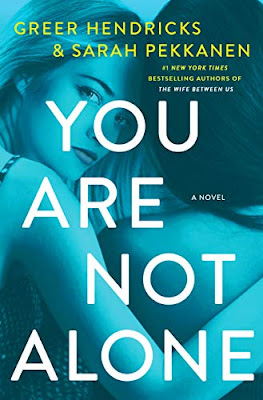 In writing duo Greer Hendricks and Sarah Pekkanen’s latest, You Are Not Alone, Shay Miller is doing exactly that… while sharing an apartment with someone she has feelings for—who’s engaged to someone else. She is sporadically temping for work. And her prospects for anything resembling “fun” are… well, she can barely remember what that even is.

Until one day, when a chance encounter with two women, Cassandra and Jane—sisters of similar age to her, who are vibrant, beautiful, captivating, and (what??) apparently utterly charmed by Shay—changes everything. If these fabulous, successful women could really like nice, mild-mannered her, then she must be kind of okay. Suddenly, she feels positive about herself, and life in general: the days seem brighter, people she passes on the street friendlier, and her outlook on the future is definitely tinted some shade of rosy-gold.

The key, Shay knows, is her friendship with Cassandra and Jane. She would do almost anything to impress and keep these magnetic new friends, and with that in mind, becomes obsessed with doing whatever they want… from making changes to her appearance, her job, finding a new place to live, and trying online dating, she does it all, at the sisters’ urging.

But, as with most highs, once that first crazy intensity starts to wear off, Shay begins to feel doubts and worries nudging their way into her bliss. Something doesn’t feel right… and when she wakes up one morning to find herself wanted by the police—regarding a murder(!!)—she’s determined to figure out if it’s all part of a horrible misunderstanding… or if some of the odd coincidences she’s been noticing might actually be much more sinister in nature.
_________________

With a narrative that goes back and forth between different POVs and different time periods, You Are Not Alone is a book that requires you to pay attention rather than speeding right through it. (I mean, you could, but you’d be way more apt to miss those little details and nuggets that come back later, which wouldn’t be nearly so much fun.) A lot of people don’t enjoy this style of disjointed storytelling, but if, like me, you really do, then You Are Not Alone will definitely be your jam.

Hendricks and Pekkanen also do a bang-up job of ramping up the suspense here. There’s never a dull chapter, no “why-on-earth-did-they-write-that?” passages to endure; it’s a tight, finely-crafted, “OMG-this-could-all-totally-happen-to-me-or-someone-I-know” tale, that races with the speed of a fast-moving train toward its final destination… and oh, how you’re gonna want to get there. Highly recommended!!