June 03, 2020
When it comes to detective novels (whether suspense/thriller, police procedurals, or P.I.s), there’s no shortage of smart, interesting, “mature” male characters out there… but precious few female detectives “of a certain age” in starring roles. For every Vera Stanhope or Temperance Brennan, we’ve probably got a dozen middle-aged guys… which, given the number of women in these careers, who are nearing retirement, seems like an oversight that needs to be corrected. 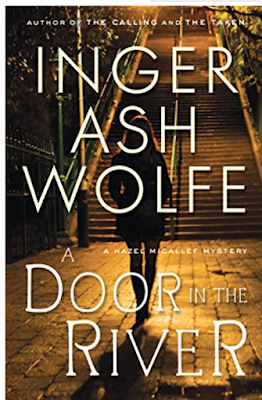 With A Door in the River, author Inger Ash Wolfe takes a step in the right direction. (An author new to me, 2012’s River is actually the third in the series, but reads easily as a standalone.)
__________

Detective Inspector Hazel Micallef has a good grasp of the goings on in her patch, which is comprised of little Port Dundas, Ontario, and the surrounding area. Recently divorced and now living with (and caring for) her ailing, tough-as-(really)-old-boots, elderly mother—while facing the prospects of being phased out at work, herself—the sixty-something Hazel is like a breath of unexpectedly-bracing Canadian air. She’s hardly the motherly (or grandmotherly) sort, nor is she depicted as a vibrant and sexy older woman; instead, she’s brusque and business-like, stepping on toes wherever she goes, and she impetuously pursues her hunches regardless of permission.

When Henry Wiest—the much-liked owner of the town’s hardware store—is found dead outside a smoke shop on a nearby Five Nations Reservation, the evidence seems to point to anaphylactic shock from a fluke wasp sting. But Hazel—having known Henry since he was born—maintains that the man never smoked… making his presence in the parking lot of said establishment peculiar, to say the least.

After the autopsy reveals a cause other than wasp, Hazel goes back to the reserve to dig a little deeper. What she finds, though, makes even less sense to her: a mysterious young woman was apparently meeting the happily-married Henry in secret, when he died. And, just as perplexing, is the reserve’s uncooperative police force, which is seemingly intent on stopping Hazel’s investigation in its tracks… particularly when it leads her from the smoke shop to the popular casino, nearby.

What no one takes into account is that it’s never wise to underestimate a mature woman, who knows she’s old enough to have nothing to lose.
__________

Inger Ash Wolfe is the pseudonym of poet/playwright Michael Redhill, whose lovely prose betrays his literary bent. He writes Hazel with an excellent feel for both place and character—and succeeds in depicting her particular female psyche rather well; she is quite believable (if not strictly likable).

Pacing presents a bit of a problem, though; River sometimes feels like trying to wade through an almost-frozen river in January…slow-going, in other words, with little happening for long stretches at a time. And, while I remained completely invested throughout, a few elements of the plot (which of course I won’t spoil) were a little… let’s just say, out there.

But, if you’re in the mood for a different spin on a smart, determined police detective—and you’re willing to hold onto a suspension of disbelief—A Door in the River might just fit the bill.