When the Family You Have... Isn't Yours, at All (Playing Nice REVIEW)

June 23, 2020
Find someone special, settle down together, start a family; that’s always been, well… the dream, at best, or in any case, where life ends up, for most people. Today—with a whole fabulous rainbow of possibilities for what a “family” unit might look like—having some variation on the theme is still what the majority of us seemingly want. And, once we have the family, it’s only natural we feel the need to protect it—parents to safeguard their children, siblings to look out for each other, etc.—from all the things that can go wrong or bad in our world.

But what would happen if a family discovered something completely unthinkable… like finding out that they weren’t, in fact, the family they thought they were?

JP Delaney explores how that scenario might go down in his latest psychological thriller, Playing Nice.
_______________ 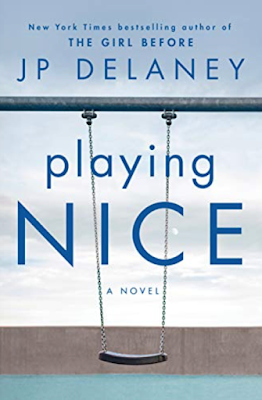 Pete Riley and his partner Maddie are more or less your average, struggling young parents. Things are a little tense, with Pete not getting done much of the writing-from-home he thought he’d be able to do after being downsized from his newspaper job, so mostly he acts as stay-at-home dad to toddler Theo, while Maddie goes to her high-pressure advertising job each day. It’s a situation which doesn’t allow for much splurging, but they’re getting by… and after a rough pregnancy, resulting in Theo’s premature arrival and subsequent long convalescence in the neonatal ward, it feels like they’ve finally achieved at least some kind of normalcy.

Until one day, that is, when a pair of strangers show up on Pete’s doorstep… the suave, wealthy Miles Lambert, accompanied by an older private investigator. The men proceed to drop a bombshell on Pete: they have test results proving conclusively that the little boy whom Miles and his wife, Lucy, have been raising for the past two years—David—is in fact, Pete and Maddie’s son… making Theo, Miles and Lucy’s child.

Pete—and Maddie, when she gets home and hears the news from her devastated partner—are dumbstruck. Could this be true? (Yep, DNA doesn’t lie.) How could it have happened? (Multiple, simultaneous, critical cases in a busy, understaffed neonatal unit, but still…) And finally, what to do, now?? (Clearly, that’s the big one.)

Once the initial shock has worn off, the only feasible solution seems clear: the two families should work together so that both sets of parents can spend time with each child, and the boys could spend time together… becoming another sort of blended family unit. No great upheavals for anyone, only positive additions!

Initially, it seems a good plan, melding the couples and their little boys into a new “framily”. But, when Miles and Lucy convince Pete and Maddie into joining them in suing the hospitals involved with the unbelievable mixup, and lawyers, counselors, and the police become a part of things, things quickly start to unravel… leaving Pete and Maddie to finally face the horrifying realization that the Lamberts don’t want to share the boys, at all; instead, they want to wrest possession of both boys, all for themselves (which they can probably do, given their wealth and status).

But that’s the thing about families, isn’t it? Something threatens ours, we go into full-on protection mode; it’s hard-wired into us. So, when their tiny family is in danger of being dismantled right before their eyes, Pete and Maddie don’t know what to do, but they know one thing for certain: they’re through playing nice.
_______________

Part of me wondered, when I picked up Playing Nice, how it would resonate—I’m not a family sort of gal, so I’ve never experienced the parent-to-child dynamic (okay, fine, with my cats, but it’s not quite the same thing, for this purpose). The shock and horror of the situation, the whole experience, as seen through the eyes of both Pete and Maddie, hits hard. My heart dropped, my insides clenched, and I held my breath… repeatedly. This one is intense.

As he’d already proven in his earlier, equally-horrifying The Girl Before (which I also loved), Delaney has mad skillz at ramping up the psychological tension and suspense, masterfully putting the reader smack-dab in his protagonist’s shoes, be they masculine work boots or a pair of pumps, and letting us feel everything.

In the mood for something that’s guaranteed to take your mind off everything else? With twists and turns aplenty? Playing Nice is the one to reach for, believe me.
~GlamKitty

[I received an ARC of Playing Nice in order to give my unbiased opinion, receiving no compensation for doing so. :)]