It can be a problem, knowing too much about something… particularly if you find that thing absolutely fascinating, and feel compelled to share said knowledge with others (who may find it similarly interesting, but in all likelihood, won’t).

There’s also something of an issue with being too fond of your own voice, whether aural or written, so I—fully acknowledging my own tendency to ramble—hesitate to call anyone out on it, but there you have it.

It’s when you combine both of those propensities, though, that things start to get really… tiresome, shall we say. And with that, I give you The Forger’s Daughter, Bradford Morrow’s sequel to his earlier The Forger. 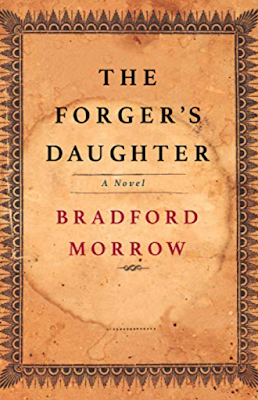 On the surface, this sounded like a can’t-miss-winner: a mid-life couple and their younger daughter leave Manhattan to spend the summer at their country home in the Hudson Valley… where secrets from the past rear up their ugly heads(!). And oh, such secrets they are… for it turns out that husband Will is an ex-forger of super-rare books (after nearly getting busted some two decades prior, and vowing to wife Meghan to NeverEverDoTHAT,EverAgain!!1!)—something which neither of the couple’s children, collegian Nicole or junior-high-schooler Maisie, know anything about.

(OF COURSE we know that’s all about to change, but it’s cool; we wouldn’t be very good readers if we couldn’t figure that much out, right?)

Anyway, Maisie returns home from visiting friends one day, scraped up and scared to death… because someone wearing a mask (that looked just like her dead uncle!) jumped out in front of her bicycle, giving her a package and instructions to hand it over to Will, then disappeared.

In the package? One of the rarest literary finds of them all (apparently): a copy of a small, obscure, early work by Edgar Allen Poe, entitled Tamerlane… so rare, in fact, that only a dozen are known to exist. And Will’s task? To create a completely-believable facsimile of same… or else.

The “or else” involves what must have been the plot of the author’s previous book; it seems Will and an old “frenemy”—one Henry Slader—had their final falling out over… something, twenty years ago, during which Slader hacked off a couple of Will’s fingers (effectively making the whole forgery thing something of a moot issue, you’d think). But now, Slader wants Will to come out of retirement… or else he’ll tell Will’s family (and possibly the authorities) about what Will did back then. And that is something Will absolutely refuses to let happen.

So, here’s the thing: if Morrow had been content letting The Forger’s Daughter be just about that scenario, and how Will (and family) dealt with the very determined (and utterly-bonkers) Shader’s demands, it could’ve been a fast-paced, cracking-good story.

Instead, we’re forced to “listen” to more internal monologues, in all their monotonous glory—from both Will and Meghan, since the narration switches back and forth from one chapter to the next—than we really need, or certainly want, to “hear”. (There’s only so much navel-gazing anyone can/should do… and a considerably-smaller amount that a reader wants to endure, on the characters’ behalves.)

Not only that, but remember how I started off… by talking about the inherent problem with being too excited about a topic? Yeah, that. Will is extremely into arcane facts about the history of rare books, famous authors, forgeries (successful and otherwise), printing, and so on… and the author lets him ramble on and on, like, forever. My eyes glazed over through more seemingly-endless passages that went absolutely nowhere than I ever thought possible. (And this, from someone who truly enjoys reading, and really likes Poe!)

Maybe you’ll enjoy The Forger’s Daughter more than I did. The author writes well, in a technical sense, so that’s something. And, while I didn’t really care about either Will or Meghan, the two daughters—Maisie and Nicole—were easy to get behind. Honestly, though, I couldn’t wait to finish this one… just to be done with it, and to never have to return.